Everyone’s Photos Any License uses the photo-sharing website Flickr to explore how the full moon is photographed and shared through various imaging technologies. I first used Flickr in 2016 as a resource for Suns from Sunsets from Flickr (2006-ongoing), which addresses the ubiquity of sunset photographs, made with common smartphone devices, shared online. In contrast to that project, and perhaps a greater reflection of the current Flickr community, Everyone’s Photos Any License, looks at a purportedly more rarified photographic practice: taking a clear photograph of the full moon requires expensive specialized photographic equipment. However, when I searched Flickr for ‘full moon’ I was surprised to find 1,146,034 nearly identical, technically proficient images, most with the ‘All Rights Reserved’ license. Seen individually any one of these images is impressive. Seen as a group, however, they seem to cancel each other out. Everyone’s Photos Any License seeks to address the shifts in meaning and value that occur when the individual subjective experience of witnessing and photographing is revealed as a collective practice, seen recontexualized in its entirety. 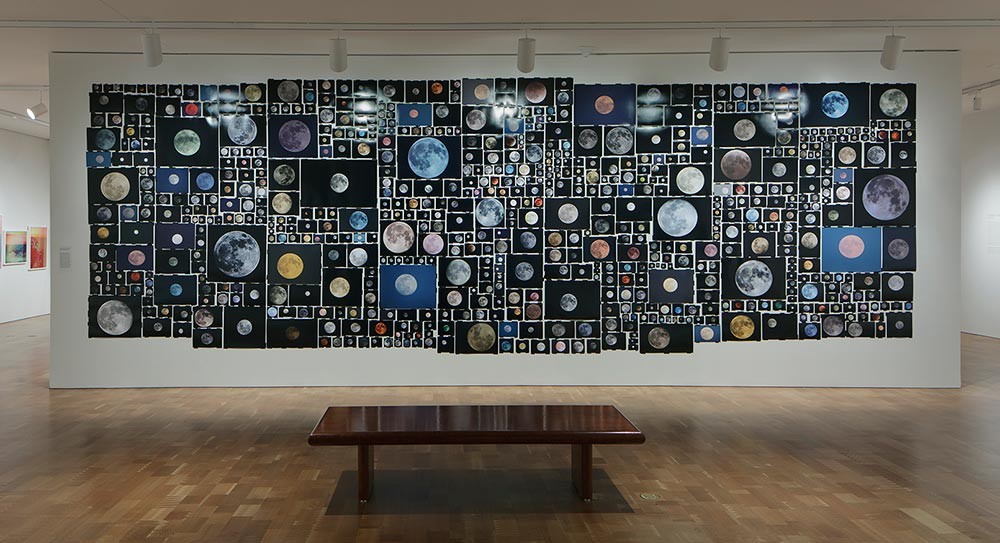 For, Everyone’s Photos Any License (654 of 1,146,034 Full Moons on Flickr, November 2015), I requested permission from 654 Flickr photographers to use their 'Rights Reserved' photographs in an installation (654 being the number of photographs I needed to fill a wall), offering to pay them one 654th of my commission if the installation was sold. For those I was not granted permission to use, and those from which I did not hear, I substituted full moon images with ‘Creative Commons’ licenses.

Individually printed, at the scale available on Flickr, and mounted on the wall, Everyone’s Photos Any License (654 of 1,146,034 Full Moons on Flickr, November 2015) is accompanied by a numbered map which corresponds to each print in the layout on the wall, as well as a corresponding attribution list compiling the names, credit line, image title, and licensing terms (Rights Reserved or Creative Commons) for each photographer. This list also includes each photographer’s descriptive remarks, along with the technical data provided on Flickr for each image. As a text piece in it’s own right, the juxtaposition of romantic and technical language embodies our relationship to the moon and our relationship to photography.

Each image above has a corresponding number on the map below and can be looked up in the Credits:

A few examples of attributions: 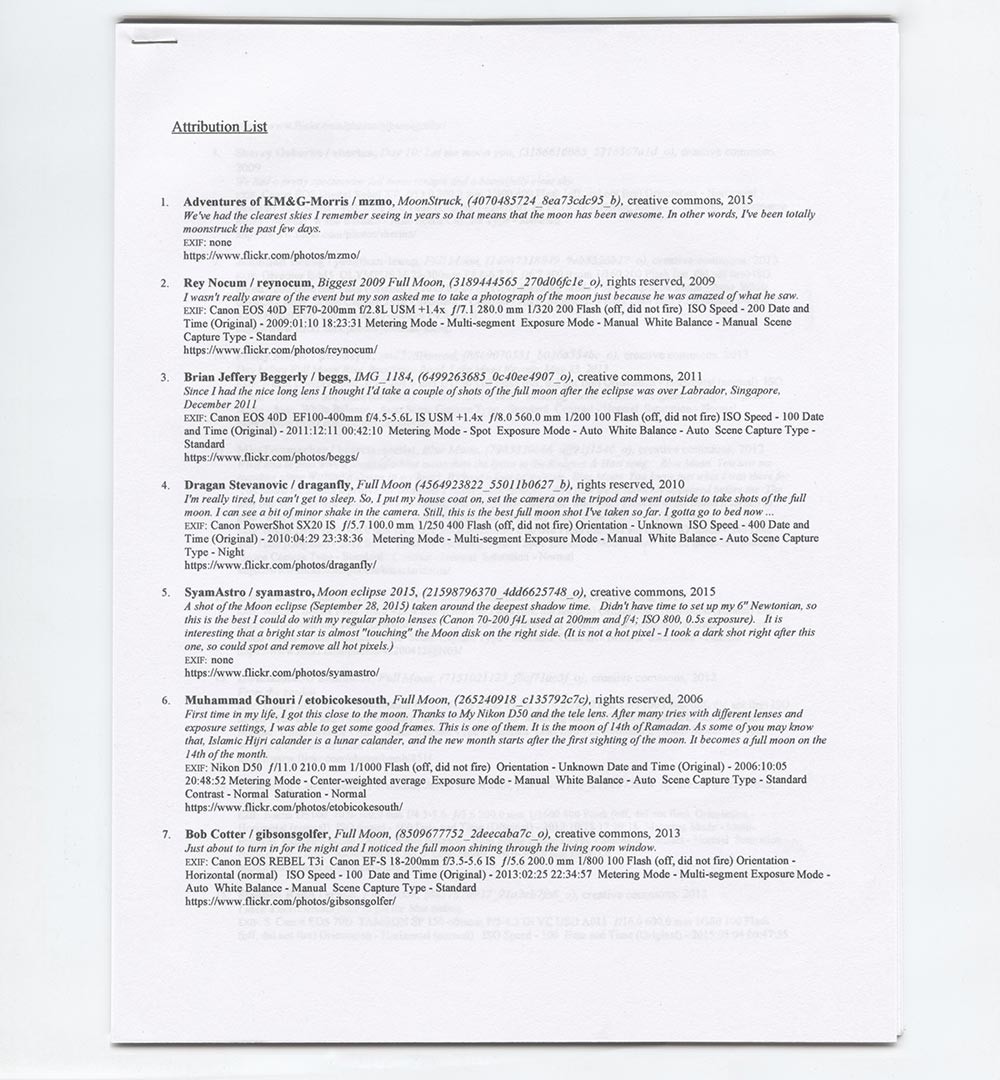 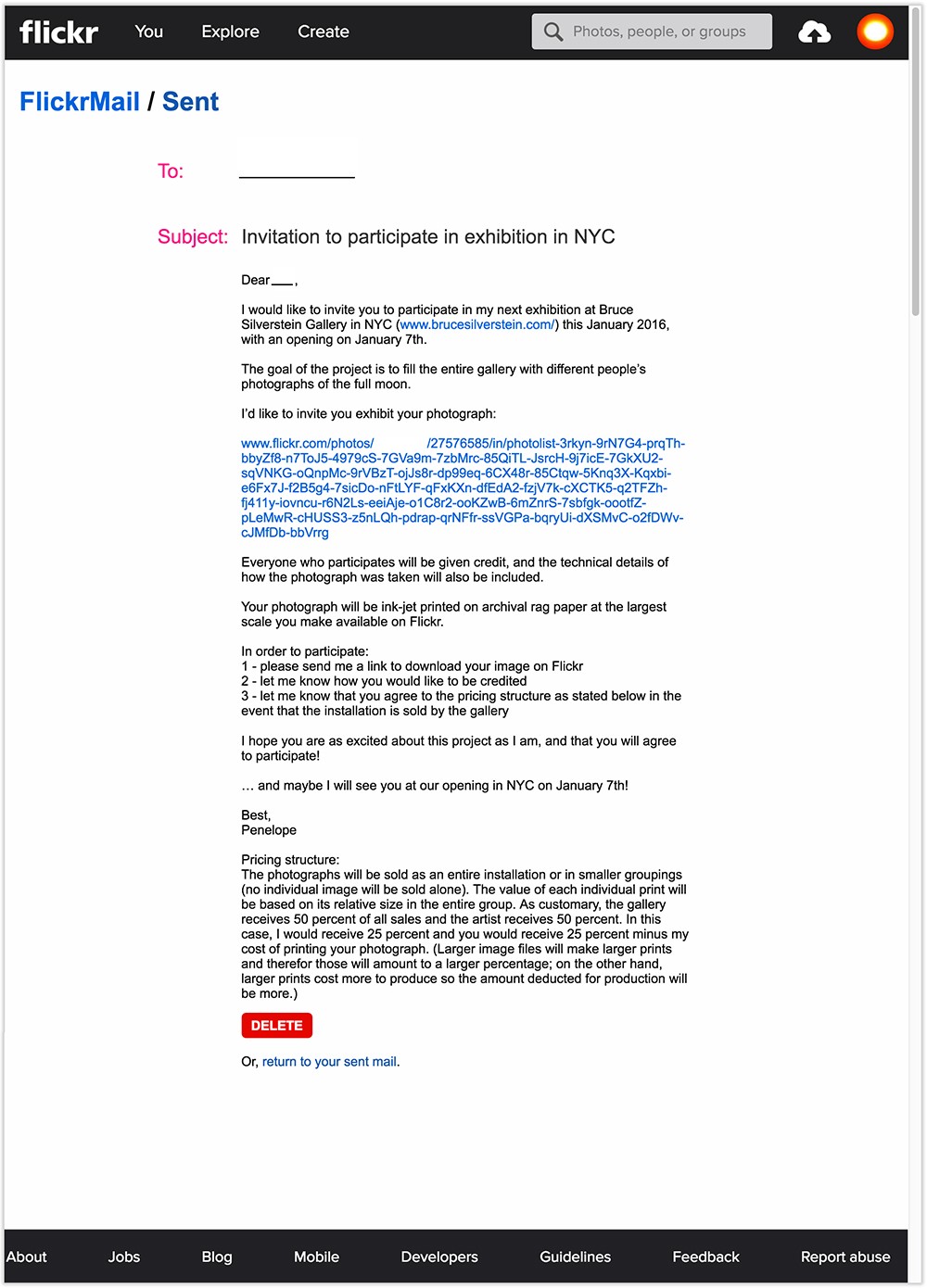 The project also includes a series of screen captures I made while producing Everyone’s Photos Any License. Screenshot 2015-11-04 14.22.59 is a continuous screenshot of every image tagged ‘full moon’ on Flickr in November 2015 (1,146,034 images total) made material as a single 11” x 436” ink-jet print. Seen in physical space, variously heaped up as though falling over itself, the volume of paper comprising the entire results of the search is in direct contrast to how we experience the search (and its platform) on the screen.


Everyone’s Photos Any License (1,190,505 Full Moons on Flickr, 2004–2019), is a two-part record of information found by running a search using the keyword “full moon” on the photo-sharing platform Flickr, using the platform’s search filters “Everyone’s photos” and “Any license”.

Part 1 is a leporello print made from a continuous screenshot of these search results (1,190,505 images uploaded since its inception), recording then the huge stockpile of images on the platform, typically only seen on screen a few at a time. The 2nd part is compiled from the text associated with each image, including the photographer’s name, the description, the type of license selected, as well as the camera’s technical EXIF data that was uploaded with each image. This text is a meditation on the moon in two languages: the romantic voice of the photographer at the time when the moon was photographed and the camera’s technical data recorded at that same moment. As a reference point to engage dialogue, a transparent movable print is included of a high-resolution image of the moon that NASA makes available for free on its website.

The video, Everyone’s Moon 2015-11-04 14:22:59 was made on my computer by scrolling through the 436” long image file, Screenshot 2015-11-04 14.22.59, and using the “movie recording” feature of QuickTime to record the movement on my screen. The sound of the computer struggling to scroll quickly up and down this incredibly heavy file is the sound track, and the resulting video presents more than a million frenetic moons falling and raising to the sound of indeterminate, almost other-worldly, static.

Screenshot 2015-11-07 18.34.11 / Pink Filter and Screenshot 2015-11-24 18.14.32 / Blue Filter utilize Flickr’s color search filters. For this work I redacted all the text information alluding the any individual or institution, allowing the underlying organizing structure of the Flickr platform to reveal itself as the form through which we see ‘everyone’s photographs’. 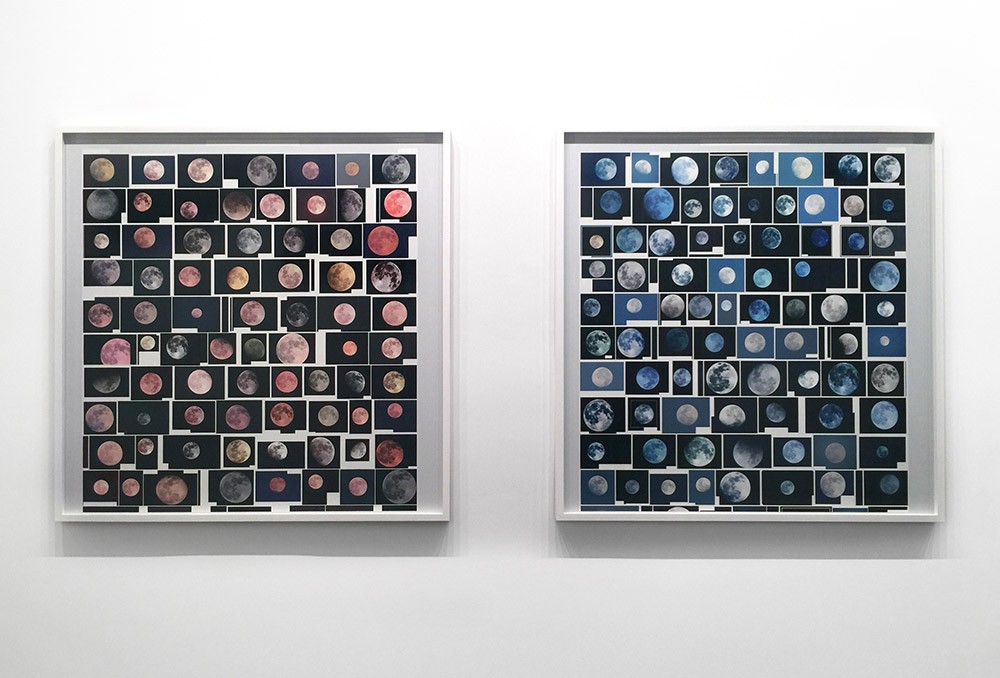 Working with the idea of reflective vs. projective light, I inverted colors of my computer’s screen as I worked on the files for Screenshot 2015-11-24 / Dark as Light, producing tones and hues more associated with analog film negatives then the digital screen. In this work, dark becomes light, light and the reflective moon becomes dark, The natural light that photographers seek to capture, now most often converted into digital code and viewed through the light of our screens, compromised, and altered once more when I print the digitally sourced images from photo-sharing websites onto paper – screen-light becomes black-ink on white (opaque) paper.

I turned to Google moon to explore the possibility of making my own images of the moon. If Flickr photographers justify owning the representation of the moon solely based on the privilege of their investment in photographic technology (see emails below), then Google is the epitome of this kind of colonialism, with Google Earth and now Google Moon, having a near monopoly on how we view the world today. For iPhone Camera Roll Screen-grabs (Google Moon), I photographed Google Moon on my computer screen with my iPhone, attempting to make ‘subjective’ images from Google’s composited NASA photographs. In this work, screen resolution, pixel grid, and camera sensor conflict, creating Moiré patterns that interject into the already compromised representation of the moon. To further trouble these representations, I then made screen captures in-between the images in my iPhone’s ‘camera roll’, eclipsing the images of the moon with the framing structure of the ‘camera roll’ interface. Made entirely in and between screens, the resulting images could reference scientific studies. But the various components gathered together for inspection are only the results of the digital idiosyncrasies of common imaging technologies. 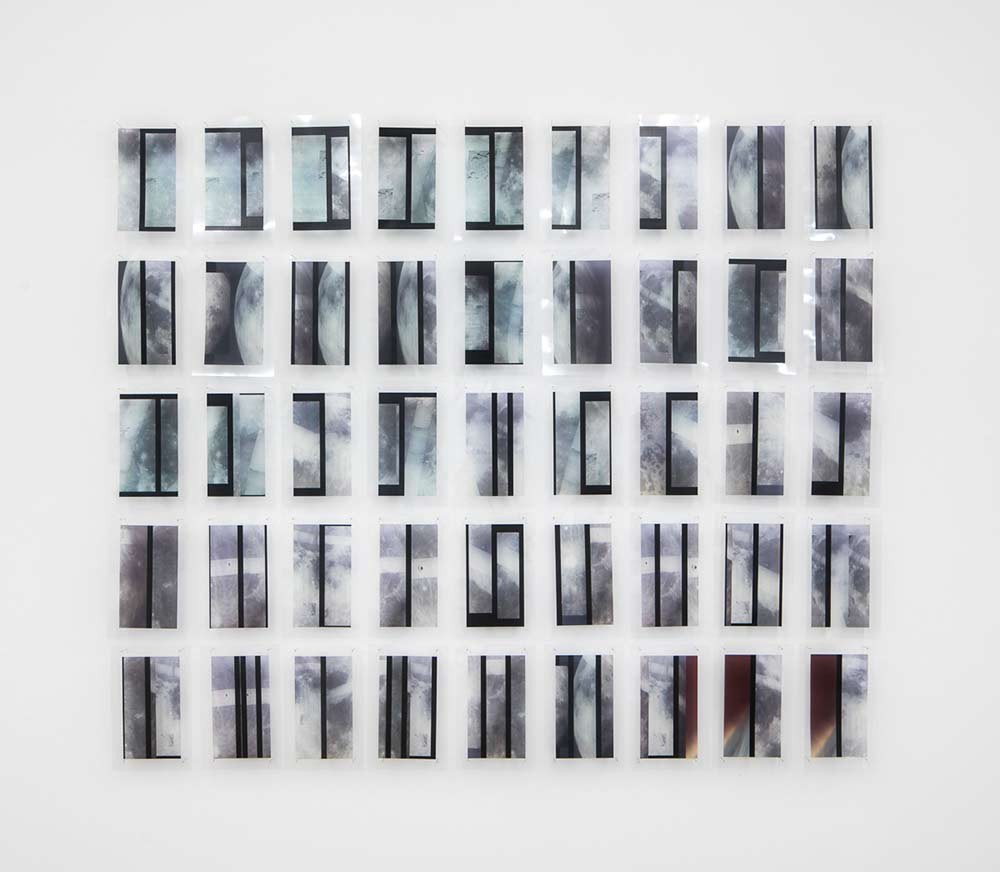 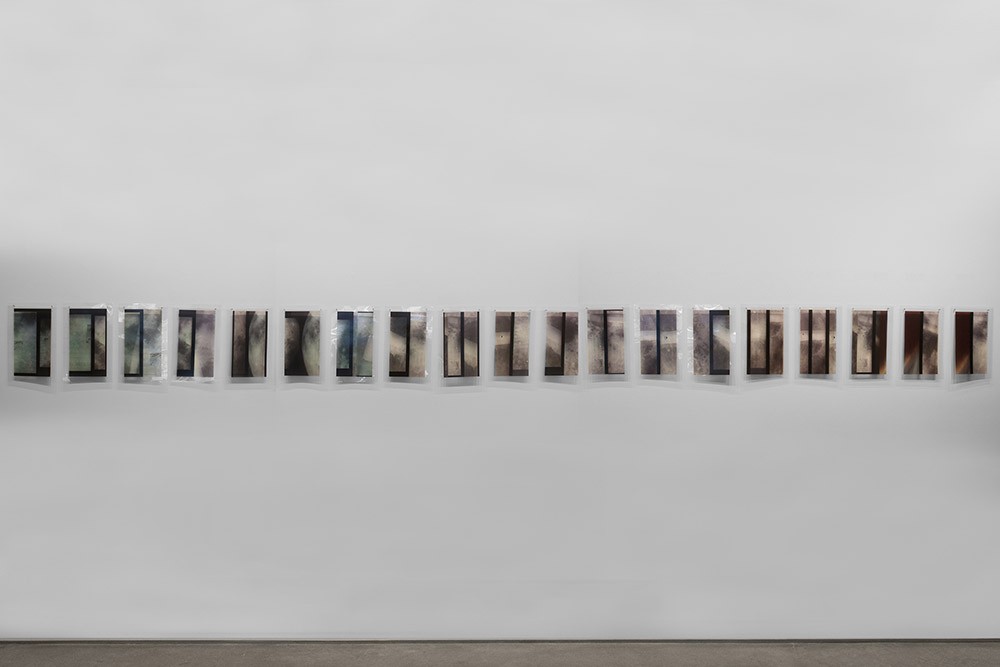 
Some responses to the invitation: